You are here: Home / Thermomix / Scones

Scones!  Who would have thought this would be so difficult!

Earlier this week I was asked for a scone recipe … “Sure” I said … and then into the rabbit hole of scone making I fell!

I had some recipes in my “To Try” file which I resurrected, but when I took a closer look they were all so different.  I knew I didn’t want to go down the path of the famous three ingredient scone recipe of cream, flour and lemonade.  I have had those scones and know they are brilliant, but I can’t bring myself to use lemonade.  I also wasn’t aware there was such a difference between the Aussie scone, English scone, and American scone (which is sometimes call a “biscuit”).

So when researching recipes from the CWA and Women’s Weekly as well as some of the great bakers I refer to in my world (Margaret Fulton, Maggie Beer, Belinda Jeffery, Anneka Manning, Mary Berry, Dorie Greenspan, Rose Beranbaum, et al), I became more confused:  eggs in or out, butter in or out, cream in or out, water in or out, self raising flour vs plain flour with raising agent, etc. etc.  The more I researched the more confused I got.  So I starting trialling some recipes this week, and as time progressed I realised there was no wrong or right way to make scones, it really comes down to the texture and flavour that you like … that is what makes a good scone for someone.

After numerous attempts this week, this is the recipe I finally settled on … I wanted something light, something a little crusty, and something with flavour, although I know lots of flavour comes from the jam and cream used on top of the scone, as it is a wonderful vehicle for those toppings.

I do hope you like this recipe … many of my neighbours and friends have given it the thumbs up, as has the “man of the house” who loves a good scone, especially with jam and cream!

Flour, sugar, baking powder and salt in a mixing bowl and stirred together with a whisk

1 Tbls of egg is put aside for the tops of the scones, and the milk, cream and vanilla is added to the rest of the egg and mixed in

The milk mixture is added to the flour mix …

Dough is placed on an unfloured bench, with a scraper near by to help if needed

With floured hands the dough is lightly kneaded together until it is a single mass, then the scraper is used to help lift it up into one hand …

… whilst the other hand flours the bench top

Dough is placed on top of the flour …

… and either patted out or rolled out until 3cm deep

Floured cutter in pressed directly into the dough – with no twisting …

… and then placed onto the baking tray

Process is repeated until all the dough is used up

Once all the scones are on the tray, they are lightly brushed over with the tbls of egg put aside earlier …

… and baked for about 15 minutes until golden coloured

Try to handle the dough as little as possible ... this will help stop the development of gluten which can give you a dense scone ... which is not what we are aiming for.

When cutting into the scone with your cutter, press directly down into the dough ... do not twist the cutter as that can "mess" the sides of the dough together which can inhibit the rising of the scones.

Scones are best served warm on the day they are made, but can also be lightly warmed through in the oven the next day, or if you are like me I like to cut them in half and toast them in the sandwich toaster which gives them a gorgeous crust.
3.5.3251 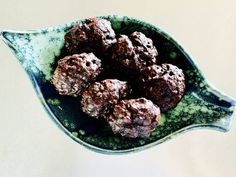